Skip to content
The last in the series! We finish the genetic algorithm by applying a mutation to the newly evolved networks and then we write a bit of code to output the average time alive for each generation.

This is part of an ongoing series in which we experiment with different methods of AI. We’ll look at the state of the art and the out of fashion; the practical and the (seemingly) impractical; to find what works and what doesn’t.

You can download the source code for the project here. You’ll find a folder for each part of the experiment so you can jump in and follow along. I’ll go through the code in some detail but there is a lot to cover so will brush over some programming concepts to focus on the AI components we are writing.

In this, the final part, we finish our genetic algorithm (that we started here) by applying a mutation to the newly evolved networks and then we write a bit of code to output the average time alive for each generation. We can use this to make sure that our eyes are not deceiving us and the UFOs are actually evolving to become better at avoiding each other with each new generation.

So what do I mean when I talk about mutating a neural network?

Mutation is a genetic operator used to maintain genetic diversity from one generation of a population of genetic algorithm chromosomes to the next.

By making small random tweaks to our neural network weights we get a new solution that may not have been found by combining two neural networks (crossover) alone. If this mutation is beneficial then there is a good chance that it will be added to the pool of possible solutions and re-used in future generations.Before we implement our mutation function, we need a method of limiting when a mutation occurs. We don’t want the mutation to occur on every new neural network so we need some way of setting the chance a mutation will happen. We’ll do this in our GeneticAlgorithm class.

Setting the mutation chance to 0.1 in the constructor means that on average 1 in 10 neural networks will be mutated. This may be slightly higher than we would want for this project but we can always test and adjust once we’ve finished implementing mutation.We’ll apply the mutation to our neural networks in the Update function.

We call the Mutate function on our neural network class. This method does not exist yet so we’ll create it now.

I’ve used a specific type of mutation called ‘swap mutation’ which gains its name from the fact that we swap weights at two locations. There are other mutation variants that you can play around with, others may work better than swap mutation but I know from previous experience that swap mutation does a decent job. It works like this:

And that’s it for the mutation function, now when you run the simulation the neural networks will be mutated based on the set mutation rate.

And thats the last bit of code we will write for our evolutionary algorithm in this series! Now for the last part: testing. We could just watch the UFOs but I like to be able to prove with numbers that we’ve actually achieved our original goal. We can do this quickly and simply by logging the average time alive for each generation to a text file. We’ll do this in our GeneticAlgorithm class.

Along with the function that logs the output to file we also have an ofstream that we’ll use to write to the file, a genNumber which stores our current generation number, and addedToGame which stores how many UFOs we’ve added to the game. We’ll use addedToGame to calculate the number of generations that have passed. A generation has passed when the number of UFOs spawned exceeds the maximum number of UFOs we store in the pool. We’ll calculate this in the Update function.

When addedToGame is greater than our max pool size we call our log function and reset addedToGame for the next generation.

We calculate average fitness by dividing the total fitness score (the sum of all UFOs time alive in the pool) by the number of UFOs in the pool.

They accomplish this fantastic average time alive by only moving when necessary. They become mostly stationary and only move when another UFO comes very close to them. They choose to mostly ignore the UFOs that within their sight range but not close enough to damage them. 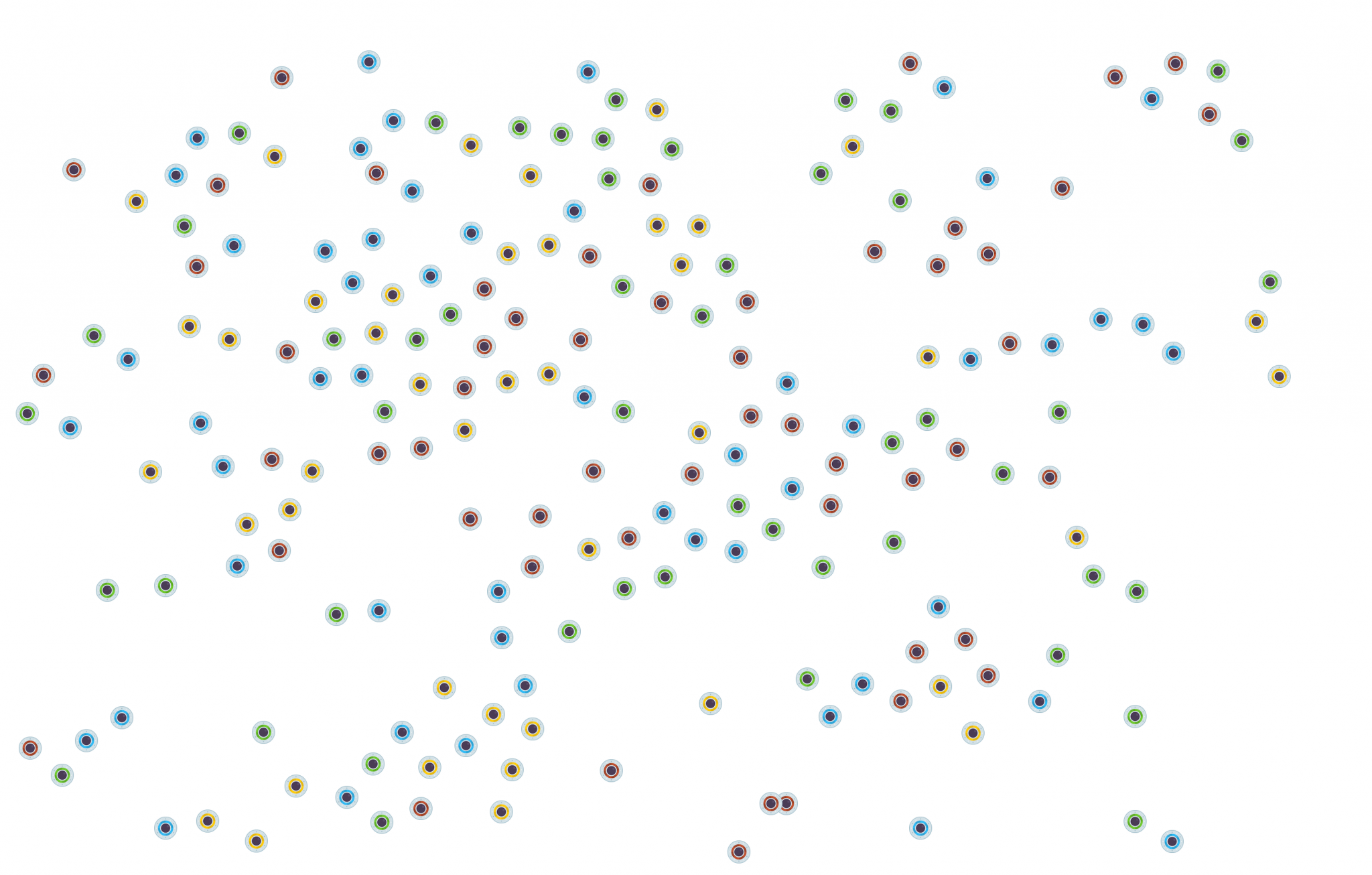 You’ll have to trust me that these UFOs are not moving much.

And that just leaves me to conclude the project. There are a few questions I would like to answer: Did we meet our original goal? and is this a realistic method to use in a real game? Let’s reiterate our initial goal:

Have 60+ UFOs onscreen that have taught themselves to avoid each other and the sides of their environment.

Well, in the image above there are 200 UFOs who have achieved exactly that. So I would say yes we’ve definitely met our initial goal! Which is fantastic but is this method of AI currently realistic? To answer that I’ll list some of the pros and cons of our implementation. We’ll start with the good points:

I’m sure I could think of more for each column but yikes, there do seem to be a few more negatives than positives. And to be honest this definitely isn’t the best way to solve our initial problem. I knew that from the start but by going through this process we’ve learnt a lot about how these systems work and we can apply that knowledge in the future to problems that may be a bit more suited to our neural network/genetic algorithm combo.

And thats all for this part of the series! Well done for making it this far. Let me know if you need help with anything, had a great idea of how to use this in a real game, or have spotted a bug in my code that I’ve missed.

I think next time I’ll try a more traditional form of AI, possibly goal-oriented action planning. Maybe we could combine our neural networks with the more structured actions in goap? Whatever I chose to do, it won’t be too long before I start another ‘Experiments in AI’ series, as I had a great time writing this one!

Quick update: I made an overly long video showing the evolution of the UFOs. If you jump from the beginning to near the end of the video you’ll notice a stark contrast to how they initially behave (random movement) to how they behave at the end of the video (purposeful, minimal movement). I hope you’ve enjoyed the series (or at least found it useful). I’ve definitely had fun writing it. Until next time!